The American Board of Orthodontics awards the 2019 Dale B. Wade Award of Excellence in Orthodontics to Dr. Eustáquio A. Araújo 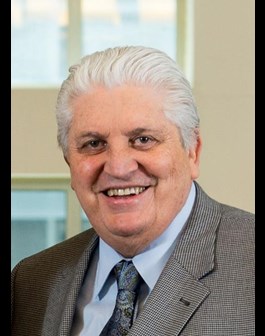 The Dale B. Wade Award recognizes an exemplary senior clinician and board certified orthodontist who demonstrates exceptional dedication to orthodontics through clinical excellence and/or devoted teaching in the image of Dr. Dale B. Wade, an ABO past president.

Dr. Araújo has been a leader in orthodontic education on two continents. He is a former program director for graduate orthodontics at Saint Louis University and clinic director of the university’s Center for Advanced Dental Education. Currently, he continues his teaching at SLU and is the head of the dental program of FCMMG – Faculdade de Ciências Médicas de Minas Gerais, Belo Horizonte, Brazil.

On receiving the award, Dr. Araújo said, “I am extremely honored. I thank my colleagues for selecting me to be part of this select group of scholars and clinicians. I thank also all my former students and residents for the important role they have played in my life.”

He has been with Saint Louis University since 2007 and was named the Pete Sotiropoulos Endowed Professor of Orthodontics in 2009.

From 2003 to 2007, he was president of the Pontificia Universidade Católica de Minas Gerais (PUCMinas), a 63,000-student private university in the city of Belo Horizonte in his native Brazil. He had returned to Brazil after serving on the faculty of Saint Louis University for two years as graduate orthodontic program director. For 26 years, from 1981 to 2007, he was on the orthodontic faculty of PUCMinas, the last 16 years as head professor of orthodontics and pediatric dentistry. He was dean of the PUCMinas School of Dentistry from 1999-2001 and was chairman of the graduate program of orthodontics for 11 years, from 1988-1999.

Dr. Araújo has authored or co-authored a textbook and over 60 papers in professional journals, and has given more than 450 lectures around the world.

He received his M.D.S. degree and orthodontic training at the University of Pittsburgh. His D.D.S. degree is from the Federal University of Minas Gerais in Brazil. He holds certification from the ABO and the BBO -Brazilian Board of Orthodontics. He was 2014-2015 president of the Brazilian board.

Dr. Araújo said board certification “is the recognition of excellence and highest achievement. The ABO and the BBO have given me the opportunity to search for excellence, always!”

Dr. Araújo was honored by the AAO Foundation with the Louise Ada Jarabak Memorial International Teaching and Research Award in 2015. He is a seven-time recipient of the instructor of the year award at Saint Louis University Center for Advanced Dental Education.

Besides his achievements in orthodontics, Dr. Araújo is a highly successful soccer coach. As head coach of the Brazilian national Futsal team, he led their participation in 21 international tournaments, including two FIFA world championships in 1992 and 1996 and 10 South American championships.